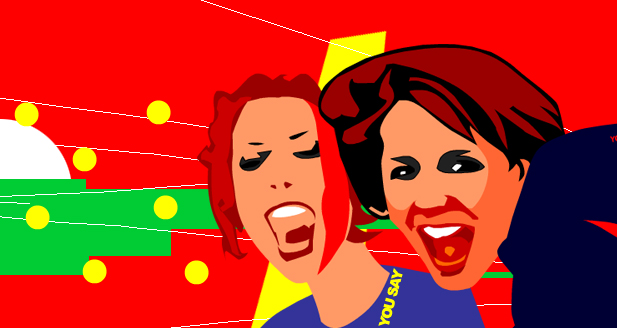 Keep those eyes peeled for magical design ideas, before they disappear into the night

The life of a web designer can be a tricky little one. On the one hand it’s a fun and cool little job, full of creativity, pixels, and japes. On the other hand it can be just a little bit scary.

The output of my brain is a frequent disappointment to me

Do you ever get the feeling you’re running on maximum power?

When faced with a design challenge, the inside of your head hurts and you start to fray at the periphery. The thing you once called a brain begins to sag. You end up drowning in a pool of grey. Your guts start to wrench. Everything sounds like Coldplay.

You, my fellow web adventurer, have hit the creative limiter.

Don’t be ashamed. It’s completely natural of course. We’re not perfect. Certainly not me. Not even Nicolas Cage. Sometimes, or rather, very often, ideas won’t manifest themselves as easily as you would wish. It would be so nice if one could pour out solutions at will. But then – that is the point isn’t it. We get paid, because it isn’t that easy. Web design tasks and problems are wide and varied. The tricks, stunts, and moves we choose to help spring ideas from their traps are numerous.

One neat approach to a nasty little brief, is to simply coax other people into solving the problem for you. A problem shared is a problem halved, and other predictable cliches.

Take off your captain‘s hat, step back from the wheel, and let someone smarter in

We must accept that a great idea can spring from pretty much any guy – another designer, a PM, a content expert, a client, your partner, your mum, your cat. Just because someone in the room isn‘t a designer, it doesn’t mean that they can’t have a crazy good idea. Unfortunately.

As the designer though, it’s your job to see it clearly, to grab it and to latch onto it, before it dies for lack of water, love, care, and attention. Clasp your hands around it, keep a hold, and you may well find yourself with that summery good feeling all over.

The megalomaniac design hamster in your head

We all have a selfish designer streak that wants to be satisfied and stopping it from raining on everyone else’s parade can be something of a task sometimes.

Often we can be so desperate to solve the problem ourselves that we lose perspective on the quality and appropriateness of our ideas. The instinct to grab at every shiny bauble on the project tree is a frustratingly strong one, that weaves a tight inescapable web all around.

Motivations include a smattering of ugly truths – greed, the desire to impress, a need to hold others back. All the good stuff then.

It’s perhaps inevitable, though sad nonetheless, that one should want to own the project, to make it mine. MINE! It’s important to realise then that it just really never is. Websites are almost always collaborative. Made by many people. Often many many people. Except for this one. And a few others. Even if there are no other designers/developers involved, then there is always the client, and they will want to participate. After all, it’s their business or organisation that stands to benefit or lose out based on what we all come up with. They’ll want to take a slice of the risk, and the glory. It is their baby too.

Being friendly and open to other people is something that doesn’t always come easily to me. Possibly it’s just a bugged out temporary state, like a hanging loading spinner. Or maybe it’s a total mental breakdown, that I’m going to have to snap the legs off of. Either way, it’s not a 100% my comfort zone. It’s not Coffee ‘n’ Countdown, that’s for sure.

However, it’s a more constructive tactic to be humble, to listen and act on the thoughts and ideas of others around you. All the great decisions don’t necessarily come from you.

So does this all mean that we can sit back and just cut and paste everyone else’s ideas on to our web design, without need for interrogation and scrutiny. Well, unless you’re insane, it doesn’t. Who’d want an ugly hulking Frankenstein website? No one. Unless, of course, you’re making a Frankenstein website. But apart from that, it’s a big flashing neon ‘No!’’

We have to be cuter than that, and learn to latch onto the good stuff, without losing time and focus on the junk. You need your antenna out and your glasses sharp. That way, you’re constantly picking up on the stuff that’s going to work, turning it to your glorious advantage, at any given moment. Ideas can sometimes come thick and fast, so taking good fast notes is always a handy skill. I find it’s best to write up any unreadable scribbbles as quickly as possible, so as to not forever live in wonder at what ‘Make the snro oklru plop more like a rnap nap pap’ actually meant and whether it would have saved the life of this ol’ website project.

Yeah, but what about Woody Allen & The Super Humans?

Apart from being my favourite ever band that never was, there are a few people who probably can zap to the best idea straight away, without ever engaging with another lost soul. They can map and see and figure everything in one shot, and make everything wonderful, blitzing their digital sorcery wherever they go. Most people aren’t these people. However, if you are one of them. Well done, and I hope we never meet. I don’t want to have to hate you.

In the end it’s important to eat humble pie, with a teaspoon

We can try to justify our ideas through rambling, and overcomplicating things. It doesn’t really get us anywhere. When you haven’t got the goods there, you really do know it.

We can try and justify a poor idea through flowery language, but we just have to accept when someone else has a better one. Design is kind of altruistic. Not as altruistic as a charity for cute little homeless rabbits, but slightly less selfish than watching Ghostbusters 1 (and 2) over and over again. Which I don’t do. We are trying to solve a problem, generally someone else’s problem. In essence we’re trying to help someone (though admittedly probably for a small sack of cash and/or Haribo), so it would be a tragedy to not listen to people’s ideas and feedback both objectively and with honourable intentions.

Design is partly about seeing things from new and different angles. This is a difficult skill to nurture. Practice helps, as does trying to get in the designer mindset. Often, though, for unknown reasons the least likely figure will look at the darned thing from a view that we’d perhaps never have seen. Don’t waste that information.

We should use our skills to develop it into a living reality, moulding it until it’s fully formed, into a beautiful wonderful webby experience.

This blog post was fuelled by worry, disappointment, and Mezzanine by Massive Attack.